The Skinny On How We Help Fat Cats and Dogs

Home/Nutrition, Senior Pet Care, Uncategorized/The Skinny On How We Help Fat Cats and Dogs
Previous Next

The Skinny On How We Help Fat Cats and Dogs 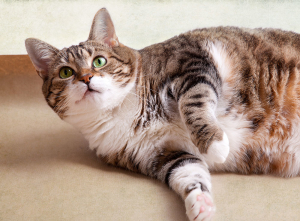 Cats and dogs in the U.S. are getting fatter, and the sad truth is that most pet owners aren’t aware of the epidemic. A spring 2015 study by the Association for Pet Prevention highlights some pretty staggering numbers: 58% of our nation’s cats and 53% of dogs are considered overweight. The study also found most owners of fat pets who participated in the survey had no idea that their Fido was on the fluffy side.

Unfortunately, obesity is now the biggest health threat to pets in the United States, according to researchers, and the costs of illness and injury as a direct result makes it the most treated medical problem in veterinary hospitals. Obesity also is one of the most preventable problems, but pet owners often let it go untreated.

If your pet is overweight, veterinarians warn that you’re cheating him of a longer life — up to three years, according to some estimates. Obesity usually begins with too many snacks, too little exercise and a tendency toward table scraps. Sound familiar? Sometimes, just 3 extra pounds to a small dog feels more like 30.

But simply being fat isn’t the only problem. Fatty tissue is a serious problem, too. The old school of thought was that fat (adipose tissue) stored energy and protected vital organs from injury. Newer research proves that fat isn’t always so innocent, however. Adipose tissue is actually an endocrine organ that secretes hormones and cytokines, proteins produced by cells to regulate the body’s natural responses to disease and infection. But when the body releases too much of the protein, inflammation occurs and, over time, may predispose the body to develop chronic diseases including arthritis, diabetes, osteoarthritis, high blood pressure and many forms of cancer.

“It is critical that pet owners understand an overweight dog or cat is not healthy.” Dr. DuBose said.

If you suspect that your animal friend weighs more than he should, give him a once over. Feel around his ribs and spine. You should easily locate both with only a thin layer of fat separating skin from bones. If you can’t find the rib cage, your four-legged friend is too fat. Have the veterinarian weigh your pet at each visit and ask for an optimal weight. If the vet says Fido is too fat, call Dr. DuBose for a structured weight loss program. She can recommend at-home exercises, supplements and the right foods to feed. Most importantly, she can put you on the right path to gifting your pet a longer, healthier life this Christmas. Other services offered by Acupet to slim down your pet include:

Hydrotherapy: Walking your dog is great but if he’s carrying too much weight, hydrotherapy may be a better option. He’s still walking, just in water and with much less pressure to muscles and sore joints. Studies show that five minutes on a hydrotherapy treadmill is the same as a human running five miles. That burns calories and helps treat arthritis, sprains, hip dysplasia, and damage to tendons or muscles. Hydrotherapy also is proven to ease overweight dogs into a healthier lifestyle without taxing their muscles or joints as they lose weight.

Acupuncture: Needling may not help your pet lose weight, but it will ease health problems that come with extra pounds, including arthritis, inflammation, diabetes, urinary tract infections, heart problems degenerative joint disease and more. It is interesting to note, however, that humans are leaning more and more on acupuncture in their constant battle to loose weight. And by some accounts, they’re winning. Researchers who have studied acupuncture and its ability to help humans drop weight have found that needling can decrease abdominal fat, suppress appetite and increase metabolism.

Learn more about our rehabilitation services »